McDonald's Battle of the Reds Tour

Following on from the Battle of the Reds event in Singapore, Masters Football travelled to Thailand for the McDonald’s Battle of the Reds in Bangkok. Featuring the same all-star cast of Liverpool and Man Utd Masters, the tour gave football fans in Thailand incredible access to some of the Reds’ biggest legends.

Leading up to the match, in which Man Utd Masters looked to even the score after their 2-0 defeat in Singapore, activities included meet and greets, cooking classes, corporate dinners and a ‘meet the media’ welcome party. 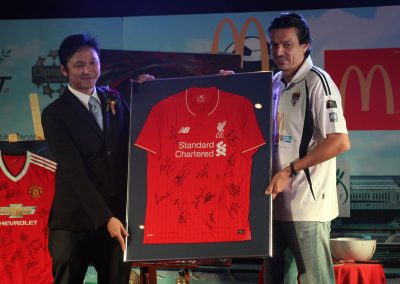 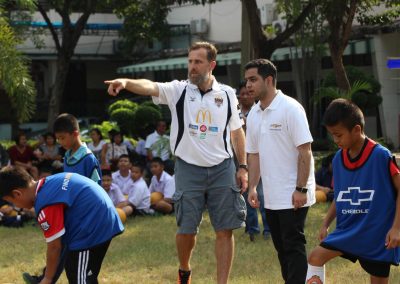 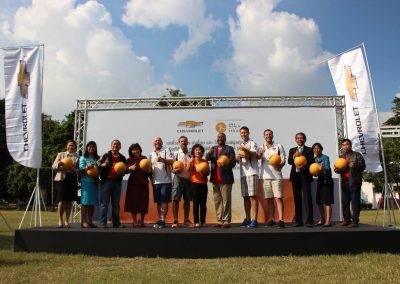 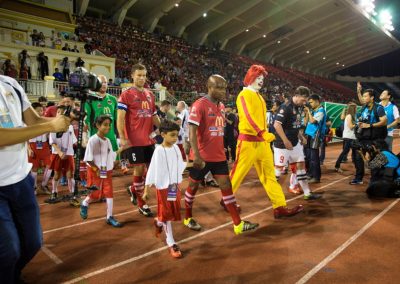 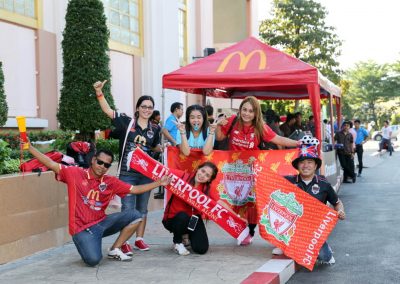 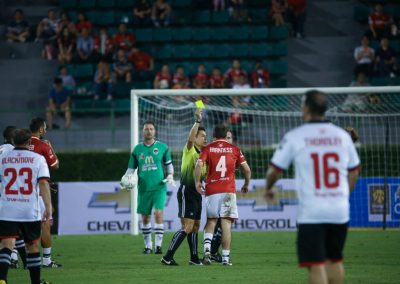 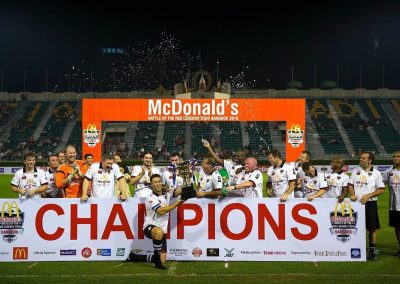 Manchester United Masters turned up in Bangkok with a point to prove, following on from their loss a few days earlier in Singapore. The United legends were determined to level the series!

Supachalasai stadium was filled with die hard fans determined to support their respective Masters teams, and the players were not in any mood to let anyone down. The game started at a high tempo with some feisty challenges on both sides, and it was clear for all to see that the rivalry between these two sides had not slowed down since the players hung up their professional boots.

Man Utd Masters were out the blocks first, Quinton Fortune was dictating the game from central midfield and when he found Russell Beardsmore roaming forward, a delightful cross from the full back found Karel Poborsky lurking on the penalty spot and his bullet header beat Dudek and nestled in the top corner – just the start the United Masters were looking for.

It wasn’t long before they doubled their lead. Clayton Blackmore’s 30-yard disguised pass was beautifully controlled by Louis Saha before turning and rocketing the ball into the top corner. Jerzy Dudek kept Liverpool in the game with a couple of outstanding saves from Fortune and Saha before Liverpool fought back.

Luis Garcia found Vladi Smicer in the penalty area before the Czech winger’s left foot drive past Culkin and in to the corner. Liverpool were in the ascendancy and some neat passing between Patrik Berger and Jari Litmanen opened the door for Kop hero Steve McManaman to equalise on the stroke of half time.

As Liverpool poured forward in search of a winner, United broke early on in the second half and Keith Gillespie beat the offside trap to find himself one on one with Dudek. Gillespie kept his composure by rounding the Polish keeper before passing the ball into an empty net. Liverpool continued to push forward in an attempt to equalise but a mixture of Nick Culkin and the goalpost managed to hold Liverpool out.

The Kop’s favourite son, Robbie Fowler, came closest when he hit the crossbar in the dying moments. But Man Utd Masters managed to hold their nerve and win 3-2 – leveling the series 1-1 after Liverpool’s victory in Singapore.